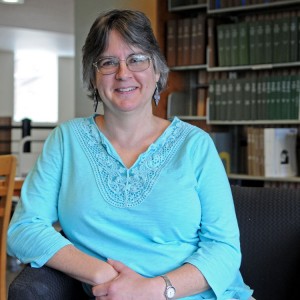 I teach in a very small department (we just increased from 3.5 to 4.5 tenure track positions this year), but the support for statistics at Cornell College is pretty amazing. Consider, for instance that for at least 30 years, one of those tenure track positions in the math department has been held by a statistician (me for the last 22 years). I’m also proud of the fact that for 40+ years the college has had a single introductory statistics course with multiple sections. This course is required for several majors and is the prerequisite for courses across the curriculum. Finally, when I was hired, the department and I agreed that when I taught math, I’d teach it the way the mathematicians wanted me to teach it, and when they taught stat, they’d teach it the way I wanted them to teach stat. This agreement continues today, though I rarely teach math anymore.

…in workshop fashion, I helped my math colleagues to explore the new material.

In the ‘90s, the college was offering between 5 and 6 sections of intro stat each year. Today the course has grown and we teach between 8 and 9 sections a year. Throughout the years I have taught 3 – 4 of the sections each year and my math colleagues teach the rest. All sections are taught from the text I choose and cover the same material. How that material is covered is up to the individual instructor.

So how is it that an algebraist convinced me to introduce simulation based methods in this course? In an attempt to learn more about statistics in general, and teaching it from a statistics perspective in particular, about 10 years ago the algebraist in my department (Jim Freeman) signed up to grade the AP Stat exam. He thought that being around statisticians for a week and grading the AP exam would help.   Apparently it worked because he’s been back every year since!

Jim first learned about simulation based methods at the AP reading and he began talking to me a number of years ago about whether we should be incorporating them into our curriculum. I was very hesitant at first because our course is required by quite a few majors on campus. I was concerned about how the faculty in those fields would react. I strongly appreciate that all students at Cornell who take statistics, take a course designed to help them not only in their major, but also in their everyday lives. I didn’t want the client disciplines to become disenchanted with our course and begin to offer their own cookbook-y course.

After much cajoling from Jim, I finally agreed to test the idea. I took one section and used the preliminary version of the Lock 5 textbook. The experience convinced me that students learn inference better through simulation, and that I could still teach them the traditional techniques that my colleagues across the college expected.

… I could still teach [students] the traditional techniques that my colleagues across the college expected.

The next step was twofold: first to convince the client disciplines that it would be a change for the better, and second to teach my colleagues the new material. To bring the client disciplines on board, I started with a series of individual, informal discussions with the faculty I thought would help convince their colleagues. Then I asked to be placed on the schedule for our Science Interest Group – a group that has a seminar once a month about some issue of general interest to scientists and social scientists. I took that hour to explain both the general idea of simulation based inference and that we were still going to be teaching the traditional methods. I received very positive feedback from those attending, which gave me the courage to continue.

To bring the client disciplines on board, I started with a series of individual, informal discussions with the faculty I thought would help convince their colleagues.

All sections of intro stat have now been taught this way for the past 3 years. Have there been bumps along the way? Sure. One client discipline (Department A) has considered dropping our course and starting their own. They complained that their students could no longer do a t-test. We have had some conversations with them, and are trying to address their needs. I think there are two parts to their concern. First, it turned out that their big issue was that students didn’t appear to think of the t-statistic as a statistic, focusing instead on the mean. We realized that since we were teaching the traditional methods after the modern methods, we were not focusing on the sampling distribution of the t-statistic (since the simulation methods focused on the sampling distribution of the mean itself). So students were not responding well to discussions of the sampling distribution of the t-statistic in later courses. This is an issue we are striving to fix. Second, the faculty in Department A have not been interested in understanding the simulation methods, so when students ask them about the use of these methods in their discipline, the faculty become uncomfortable and defensive. I don’t have a good way to solve this yet. This is local politics. And I’m working on creating a better relationship with Department A.

What about other departments? The other departments on campus have been quite receptive. We’ve had some calls from faculty asking about what their students mean by simulation methods. By and large, when we explain, these faculty are very happy and ask for resources so that they can learn more.

Bottom line? I am really glad we made the switch. I am convinced that students understand more about inference by seeing the simulation based methods. But I’m also convinced that they need to understand the traditional methods as well. While some disciplines have embraced the modern methods, many (at least at Cornell) are still using the traditional methods. I firmly believe that this will change over time, but for now, our students need to see both.