Prats discusses the April 2009 Italian earthquake during which about 300 residents lost their lives. Readers will recall news about the 13-month trial of the six scientists (and a government official), who were each sentenced to six years in prison for “providing ‘inaccurate, incomplete and contradictory information’ on the probability and risk of an earthquake and for falsely reassuring the population.” (See “The perils of failed predictions”, Chance News 89, October-November 2012.)


Prats reports that, according to the Italian Macroseismic Database, "L’Aquila has suffered earthquakes of magnitude 6 or higher on 13 occasions in the period 1315-2005, approximately every 50 years." Also, he reports that, according to a 1988 seismology paper, “Alarm systems based on a pair of short-term earthquake precursors”, "[T]he probability of a weak shock or swarm being followed by a major shock in the following 2-5 days is very low, of the order of 1-5%."


In any case, Significance Editor Julian Chamkin has given permission to post the following chart from the article (email of January 14, 2013):

1. Based on the chart, would you have recommended that the Aquila public be informed, in March or April of 2009, that they should be prepared for a serious earthquake? (Note that, according to Wikipedia[1], someone who made a March 2009 prediction of a major earthquake was accused of being "alarmist," and “forced to remove his findings from the Internet.”)


2. Consider the Challenger spacecraft disaster in 1986. The O-ring chart made famous by Edward Tufte[2] suggested potential problems with launching a spacecraft at the near-freezing temperature at which it was actually launched. An online article, “Representation and Misrepresentation: Tufte and the Morton Thiokol Engineers on the Challenger”, discusses the role of the engineers in that decision, with respect to the information available to them and to their professional ethical responsibilities. Interested readers may also check out a Berkeley professor's Q&A activity sheet, “Challenger O-Ring Data Analysis”, about the Challenger O-ring issue.


3. While we're on the topic of decision-making based, at least partially, on charts, see the chart below, which shows U.S. presidential election results in Florida for a major-party (Gore) and minor-party (Buchanan) candidate. Based on the chart, what might you have recommended to an election official? See "Why Usability Testing Matters".


Re #3, Bill Peterson called attention to the article, "Voting Irregularities in Palm Beach, Florida", Chance magazine, 2001, which contains a similar chart comparing Buchanan's votes in the 1996 primary to those in the 2000 election.

“Investments: Orlando is the cat's whiskers of stock picking”
by Mark King, The Observer, January 12 2013


During the forty years between the first publication of Burton Malkiel's A Random Walk Down Wall Street (in 1973) through its most recent (10th) edition (in 2011) there have been numerous attempts to test Malkiel's contention that "a blindfolded chimpanzee throwing darts at the stock listings can select a portfolio that performs as well as those managed by the experts." (Not surprisingly, Chance News has also been following many of these efforts-- see below.)


The set-up here is typical: a panel of financial experts is pitted against a "random" process to choose, buy, and sell stocks, which in the current version is achieved through the antics of a cat named Orlando. "While the professionals used their decades of investment knowledge and traditional stock-picking methods", the article says, "the cat selected stocks by throwing his favourite toy mouse on a grid of numbers allocated to different companies." For an additional comparison, a third process of investing was included-- by a group of high school students. The Observer designed and oversaw the "portfolio challenge", as they called it, which was a year-long effort ending on December 31, 2012:

Each team invested a notional £5,000 in five companies from the FTSE All-Share index at the start of the year. After every three months, they could exchange any stocks, replacing them with others from the index. By the end of September the professionals had generated £497 of profit compared with £292 managed by Orlando. But an unexpected turnaround in the final quarter has resulted in the cat's portfolio increasing by an average of 4.2% to end the year at £5,542.60, compared with the professionals' £5,176.60.

The students fared the worst, ending down £160 for the year.


The chart below shows the 3-year activity of the FTSE All-Share index (from Bloomberg Market Data): 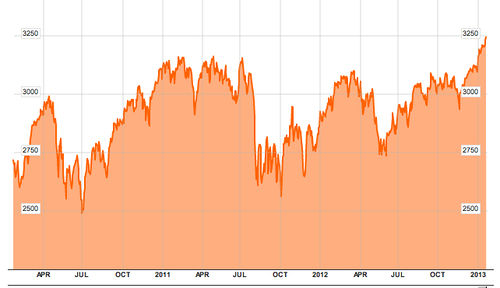 
2. The high school students who took part in the project attend the John Warner School (in Hertfordshire, England.) The school's deputy headteacher, Nigel Cook, is quoted: "The mistakes we made earlier in the year were based on selecting companies in risky areas. But while our final position was disappointing, we are happy with our progress in terms of the ground we gained at the end and how our stock-picking skills have improved." Do you think the phrase our stock-picking skills have improved is warranted? Why or why not?