About half the world's languages are tonal languages, in which the pitch or tone of words and syllables makes a difference to word meaning. Examples include: Chinese, Thai, Yoruba, and Zulu. In Mandarin Chinese, for example, the syllable "ma" can take on several unique meanings: when it's pronounced with a single high-pitched tone, "ma" means "mother." But when it has a low-pitched lilt in the middle, it means "horse", making it a word you don't want to mispronounce.

The two genes in question have emerged in the human population only very recently, 6,000 to 37,000 years ago. This implies that the very first human languages were probably tonal, sounding more like Zulu or Chinese than French or English. Furthermore, these new genes seem to be spreading quickly in the human species, suggesting that they favoured by natural selection. However, they are unevenly distributed in the world’s populations: rare in sub-Saharan Africa, most common in Europe, North Africa and Western Asia. If your ancestors were all European, with mostly nontonal languages, you have a better than even chance of carrying the two new genes.

The authors hypothesis concerns the relationship between a typological linguistic feature (namely, tone) and the "derived" alleles (variants) of two human genes. They tested the hypothesis using linguistic and genetic data from 49 populations around the world. They gathered genetic data, in the form of allele frequencies, and linguistic data, in the form of values of typological features from a variety of sources. Next they calculated the correlation between tone and each of the alleles separately. These correlations are between the tone status of the language of each population and the corresponding allele frequency in that population, based on the 49 populations in their sample. 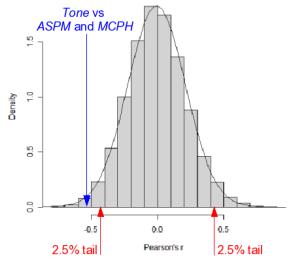 It’s because there generally isn’t a correlation between population genetics and language typology that the correlation we’ve found may be interesting. 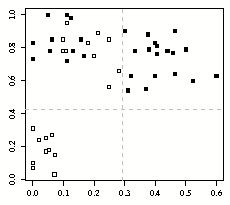 Because they compute a large number of statistical measures, the significances (p-values) of the results had to be adjusted. (When computing, for example, 1000 correlations, just by chance 10 will turn out to be significant for an alpha level of 0.01.) So the paper adjusts all p-values using Holm's multiple comparisons correction.

Remarakable correlations could happen by chance. In this case, other factors that might cause an unusual correlation to occur include prehistoric migration, that are currently unknown. Ladd said