We did this and played the first round. We chose number 13 for our briefcase. Our instruction was to choose six briefcases. We chose suitcases 3,10,12,13,19,25. Here is the result of this round: 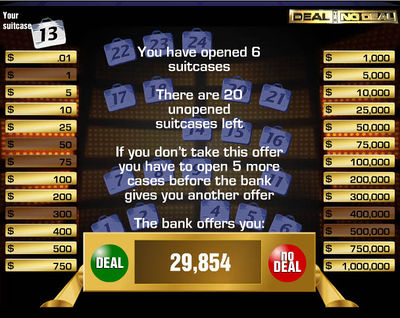 The banker has offered us $29.854 to quit. Our six choices eliminated the amounts 1,50,75,300,400,000,500,000. The expected value of our suitcase is now the average of the amounts in the remaining suitcases. Making this calculation we find that the expected value of the amount in our suitcase is $125,900 so we would have to be pretty risk adverse to accept the bankers offer at this point.

We played a second game all the way through and found the following expected values and banker's offers: